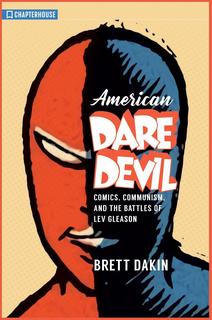 Q: Most comics fans, and even many non-comics fans, are familiar with titles that Lev Gleason published, especially Daredevil, but modern audiences don't necessarily know his name. What made you decide to write about Lev Gleason?

A: I wasn't a fan of comics growing up, and I never met Uncle Lev—he died five years before I was born.  My mother would tell me stories about her flamboyant, free-spending uncle from New York City, and I especially loved hearing about Uncle Lev's Day: once a year, Lev would drive to my mother's house near Boston, pile her and her friends into his gleaming aqua Packard, and head for the mall, where everyone was free to buy whatever their hearts desired—courtesy of Uncle Lev.  He was my mother's Emperor of Ice Cream!  I knew he had made a fortune in comic books in the 1940s—and lost it all when his business collapsed in the 1950s.  That's about it.

It really wasn't until I picked up Michael Chabon's Kavalier & Clay during my last year of law school—when I should have been studying for finals—that I thought to find out why. Chabon's chosen milieu was exactly the one in which Lev made it big as a publisher, and the anti-fascist superhero at the novel's heart sounded awfully familiar.  So, as my classmates focused on the bar exam and dreamed of prosperous futures, I found myself looking backward, into the mysterious life of a man I'd never known. One of my first stops was the New York Times index.  I was amazed to find several references to Lev, and shocked when I realized how many were filed under "U.S.—Espionage—Treason." By then, he had me hooked. 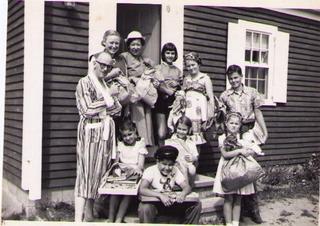 Q: Lev was an American comics pioneer. What do you think was his most important contribution to the genre, and why did you choose the title, American Daredevil: Comics, Communism, and the Battles of Lev Gleason?

A: Today, Lev is best-known for publishing the adventures of Daredevil, alter ego of Bart Hill, who was rendered mute after witnessing the brutal murder of his father and took revenge by waging a crusade against the world's criminals—all while dressed in a red-and-blue bodysuit and golden belt, carrying a boomerang shaped to mimic the painful brand his childhood tormentors had carved into his chest.  You have to love that backstory!  But in fact Lev was integral to the creation of the entire medium. While working at a printer of Sunday comics in the 1930s, he and his team figured out how to fit them two-to-a-page in 64-page booklets. Once Lev convinced a distributor to sell the books on newsstands, the monthly comic book we know today was born.

Lev was unique among early comics publishers in New York not only because of his background as a New Englander who trained at Harvard and the Sorbonne. He also knew how to hire the right people—Charlie Biro and Bob Wood (together, "Woodro")—and grant them unprecedented control, as well as a share of the profits and their names on the cover next to his. Also, Lev was not afraid to mix comics and politics, and that's where the title American Daredevil comes in.

A "daredevil" is a risk-taker, and the risks Lev took in business paid off handsomely. As for his progressive politics, and the fights he picked with the likes of Henry Ford, William Randolph Hearst, and DeWitt Wallace, it didn't always go so well.  In fact, it resulted in his being branded "un-American." Of all the labels affixed to Lev, who served in World Wars I and II, this one hurts the most. Uncle Lev was proudly, quintessentially American, and he was quite the daredevil.  I also made sure to include the word "battle" in the subtitle: Captain Battle is another beloved Lev Gleason hero, and Lev was always ready for a fight. 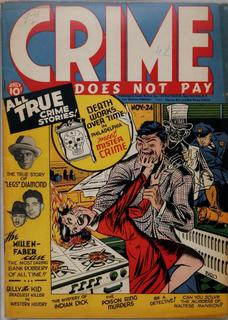 Q: Besides Daredevil, Lev's most famous and successful comic was Crime Does Not Pay, which revolutionized the comics industry at the time by turning it briefly away from superheroes and in many ways presaging America's obsession with true crime. Why do you think Lev chose to make such a dramatic shift?

A: By the time Lev's team pitched him the idea for Crime Does Not Pay in the early 1940s—they borrowed the title from a series of true-crime short films produced by MGM—he had been after them to create something new for a while. When the U.S. entered World War II, comics had received a big boost from sales to bases around the world.  But what would these men, and their children, want to read when the war came to an end, when America's enemies had been vanquished? Lev placed his bets on the exploits of real-life criminals, often graphic and gruesome, and their eventual comeuppance at the hands of the law.

I think true crime also had an intellectual appeal to Lev and Charlie Biro, his lead editor, who wanted to tell stories of men and women whose lives had, somewhere along the way, taken a turn for the worse. They were fascinated by poor choices—and bad luck. Through Crime Does Not Pay, they were able to explore the societal forces that helped produce criminality. The release of Crime coincided with a massive increase in comics sales in the U.S., and Lev's bet paid off: besting even Superman, Crime surpassed two million copies sold and reached several times as many readers. Crime became the first non-humor title to seriously compete with superheroes, opening up comics to post-war young adult male readers who had wearied of the aw-shucks wholesomeness of men in tights. 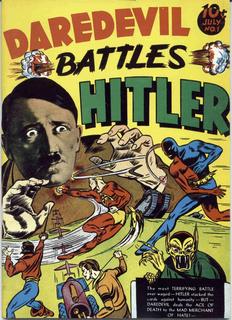 Q: Lev served in both world wars and famously published Daredevil Battles Hitler, a call to action for the United States to enter World War II at a time when many Americans preferred to stay out of it. What caused him to take such a blatantly political stance in the pages of a comic book?

A: The July 1941 cover of Daredevil Battles Hitler is among the most arresting of all of Lev's, and the title remains a Golden Age classic and coveted collector's item.  It's a typical enough scene: our dashing hero battling the forces of evil.  But this time, the enemy is real.  A photograph of Hitler's face, pasted onto a crudely illustrated torso, looms on the horizon. Daredevil hurls his boomerang directly at Hitler's chin, while U.S. military tanks aim straight for the dictator's neck.  Hitler recoils in fear, his eyes filled with terror. The message was clear: this man can be defeated. Lev and his team chose a new tag line for the series: "The Comic Magazine that dared to be different!"  And it was. With Daredevil, Lev moved the medium past the merely fantastical and into the realm of current affairs.

It was a surprise for me to learn just how reluctant Americans were to enter the war in Europe. Today, our decisive role in World War II is central to American mythmaking, but back in the early 1940s, the U.S. government was not eager to join the fight. A resolution expressing "surprise and pain" at the treatment of German Jews never even reached the Senate floor. To Lev, by sitting out the war, the U.S. was simply appeasing Hitler.

We hear a lot about "antifa" and "anti-fascists" these days, but to Lev the term was literal: he was fighting against fascism in Europe, as well as the United States. Before making it big in comics, he had published Friday, a progressive alternative to Life magazine, which focused on the war in Europe and the threat of fascism and anti-Semitism on the home front; pro-Hitler celebrity Charles Lindbergh was a frequent target. By the time Daredevil was published, Germany had invaded the Soviet Union, and Lev was furious with America's inaction. Then, in December, the unthinkable happened: America was attacked, and the U.S. declared war on Japan and then Germany. The real-life battle against Hitler was on. Soon enough, Lev would re-enlist. 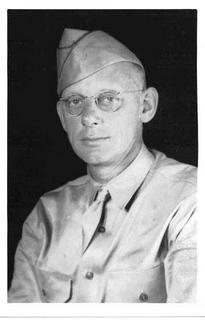 Q: One of the assertions Lev fought against was that comic books were just for kids, that they were harmful to America's youth, and that there was a direct link between comics and teenage delinquency. In some ways, we are still having this same argument today, but with violent video games and movies coming into the crosshairs of would-be regulators. Why do you think Lev fought so against this label?

A: Lev was at the forefront of the fight to defend the comics industry against government censorship, in legislatures, before judges, and in the court of public opinion. The two most prominent anti-comics figures in the 1950s were Dr. Fredric Wertham, whose sensational Seduction of the Innocent fomented fears about the impact on kids, and Estes Kefauver of Tennessee, who led a high-profile investigation of comics in the U.S. Senate.  Lev debated both of these men on live radio and television. Reminding audiences that at least half of his readers were actually adults, his favorite argument in defense of comics was to point to their popularity: "I am certain comics are good because we sell so many of them." Who were these elitist critics to tell people what to read? Of course, Lev was looking to sell as many comics as possible—and some of his titles were indeed pretty gruesome, especially for the time.

But Lev really did believe that comics could be beneficial: they helped kids learn to read, and taught important lessons about the dangers of crime. And Lev was categorically opposed to government censorship, which he called "un-American." His position ultimately prevailed in the courts, and we now know that Dr. Wertham's arguments—including his outlandish claim that comics promoted homosexuality—were based on flimsy research and doctored data. But the hysteria led the industry to self-censor, effectively banning Lev's popular crime comics. The Comics Code did a more effective job than the government ever could have.

"Essential reading for both the casual reader as well as students of comic book history."

"A must for anyone looking to understand Laos today."